Ganga Puri enjoys the privilege of being born in Haridwar (the Gate of Heaven), India, on the bank of the holy river Ganga (Ganges), in the foothills of the Himalayas.
His father, Baba Santosh Puri, having become a Juna Akhara, naga sanyasi at a young age, practiced severe yogic austerities on an island in the middle of the Ganga River, until he was blessed with a vision of goddess Ganga.
His mother, Narmada Devi Puri Ma, was a young seeker of Truth from Germany, who arrived on the island to renounce all heritage, to devote her life to her guru and do meditation along the Ganga, and eventualy take sanyas.

After ten years of austerities together, Ganga Puri was born as an expected gift of Mother Ganga. His childhood passed in the company of holy men and women as his only relatives.

Ganga Puri graduated with a degree in Physics & Mathematics from the Grahwal University in Srinagar. After the mahasamadhi of his father (soon after the 2001 Allahabad Maha Kumbh Mela), a fundamental change of realization overcame the student of Science causing Ganga to change his life path onto the complete devotion to the Divine Truth. Meditation and yoga practices became his main activities. At the Gurukul Kangry University of Swami Dayananda Saraswati, Ganga Puri received his post-graduate diploma and Master’s Degree in Human Consciousness and Yogic Science.

After over twelve years of self-study, continuous practice and deep devotion, he developed his original yoga style he calls “āyāsa vinyāsa YogAnga abhyāsa“, a seven limbed hatha yoga practice which includes: Shatkarma, Asana, Mudra, Pratyahara, Pranayama, Dhyaan and Samadhi as mentioned in ancient scripture. Designed to instill enthusiasm and discipline in aspiring yogis, as well as inspiration to maintain one’s own self-practice, Ganga’s yoga sessions bring precise alignment of the physical body, awareness of the breath as well as the prana, clarity to the mind, balance of the three gunas as well as the male/female energies within, opening of the chakras and a heightened connection with the natural and supernatural universe around us.

As a Yog-Acharya (master of yoga), he devotes all his life‘s prana to serve and promote a yogic lifestyle, leading yoga courses and Vedic studies for curious aspirants of truth who visit his father’s namesake, Santosh Puri Ashram. Together with his younger sisters, Mandakini Puri and Alaknanda Puri, he shares responsibilities of running the spiritual heritage of his yogic family, Santosh Puri Ashram, which has developed into a Yoga Retreat Centre for spiritual research, Ayurveda and the yogic art of living, popular among foreigners who are serious about their sadhana. His East and West origins help him, to naturally connect ancient Indian wisdom with our current modern lifestyles and mindsets, making his teachings relatable to wide audiences abroad. With all his heart he speaks the teachings of traditional scriptural based yogic philosophy (Hatha Yoga Pradipika; Gheramd Samhita; Tantra; Yoga Sutras; Shiva Sutras, and Advaita Vedanta), embracing every individual soul. Every single day Ganga Puri brings his hands in prayer, holds space in his heart and is a living example and inspiration to many spiritual seekers, who are willing to go to the depths of practice with him. 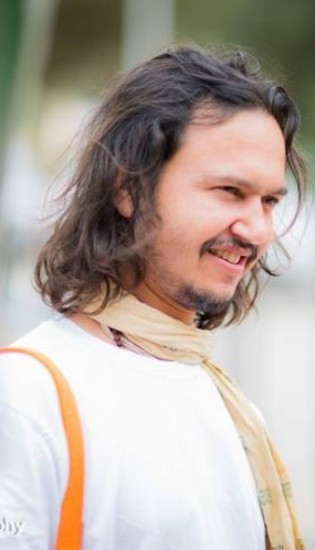