Alaknanda (the youngest of the three siblings) grew up in the company of saints and seers, especially those adept with thescience and art of living. By the age of 19 she began studying the Sanskrit scriptures of Swara Yoga and Ayurveda with Swami Anantanand Ji who also shared with her some secrets of life. At the same time she was visiting other traditional practitioners of Ayurveda who were well versed in making classical medicinal preparations, from whom she gained inspiration to begin making her own home remedies.

In 2002 Alaknanda started her formal studies in her home state of Uttarakhand, first gaining a certificate in traditional Auyrveda Vaidyavisharad from Hindi Sahitya Sammelan Allahabad. Then she gained a Diploma in Holistic Health Management from Dev Sanskriti University in Haridwar, where she also studied Pranic Healing with the World Pranic Healing Foundation (based in the Philippines). Later she completed her BA in Philosophy as well as a one year course in Yogic Science from Shrinagar University. In August 2014 she completed her five years of study for her Bachelors in Ayurveda Medical Science at Ayurveda College Coimbotore, Tamil Nadu.

Throughout all this time, sharing the knowledge from her studies, Alaknanda has been teaching not only at the ashram, but also as a guest lecturer locally at Dev Sanskriti University and Post Graduate College of Yogic Science well as in various workshops and retreats in Goa, Andhra Pradesh, and most recently through out Europe.

She finds great pleasure when students apply the knowledge she offers in their lives. In her life, she wants to bring people above the gunas and the doshas, to really encourage their highest potential in the Divine, in the name of Ayurveda, to practice the art of living. Alaknanda is currently teaching courses in Ayurveda, Sukshma Vyayaam and Asana at Santosh Puri Ashram. 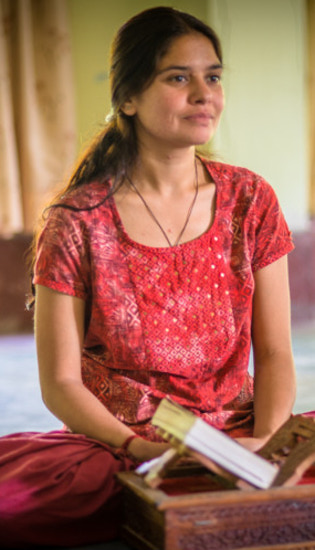